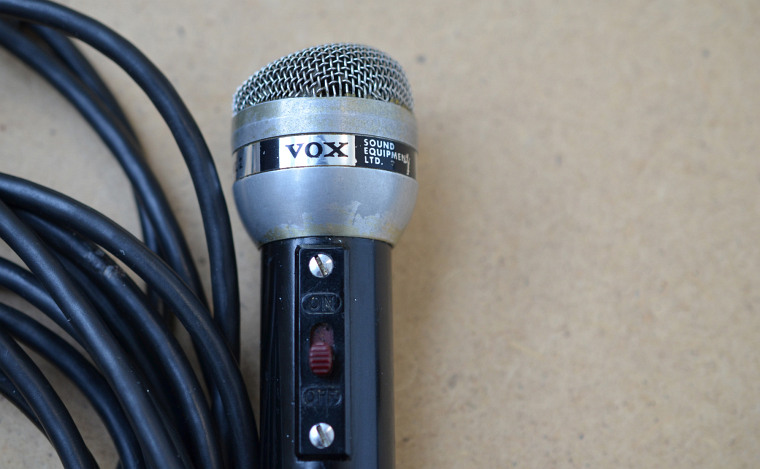 A new page begun on Vox VL1, VL2 and VL3 microphones. These originally came into the Vox catalogue in 1966.

On the 3rd January 1969, Les Hills, who had designed the electronics of the T60 amplifier and various organs for Jennings, lodged a patent application on behalf of "Vox Sound Equipment Limited" for a polyphonic keyboard circuit. The designers of the circuit were Hills himself, Rodney Angell and Kenneth McDonnell, all VSEL employees.

The application is archived on the European patents website here, aggregated from a German and Dutch source. 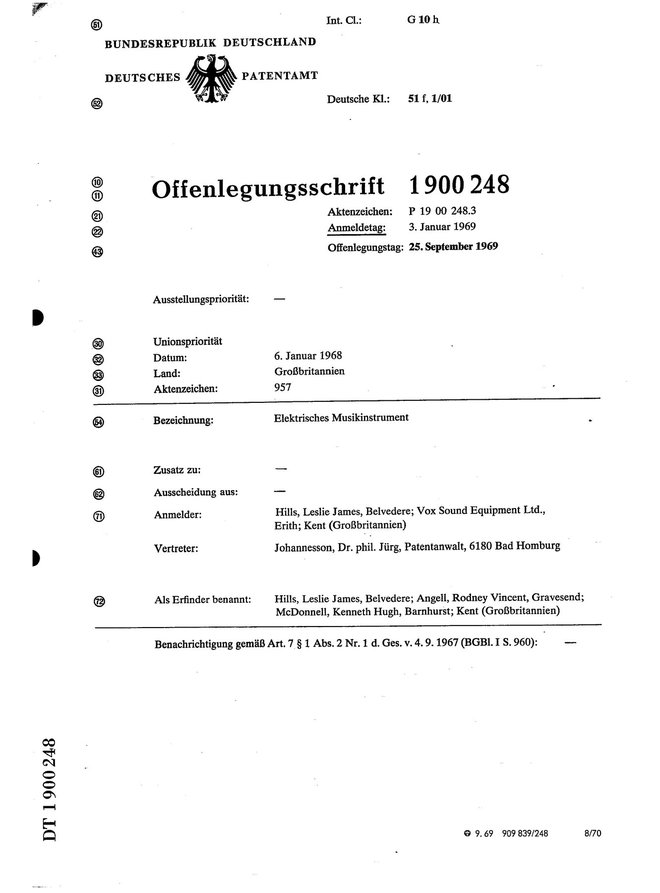 The cover page of the sixteen page German outline of the circuit. A translation of the whole will be made available in due course. 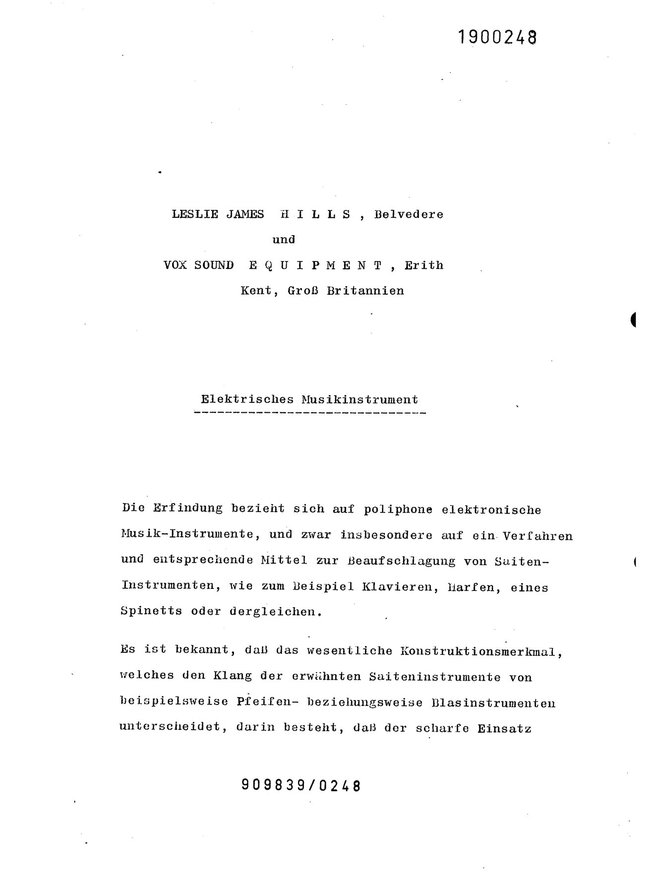 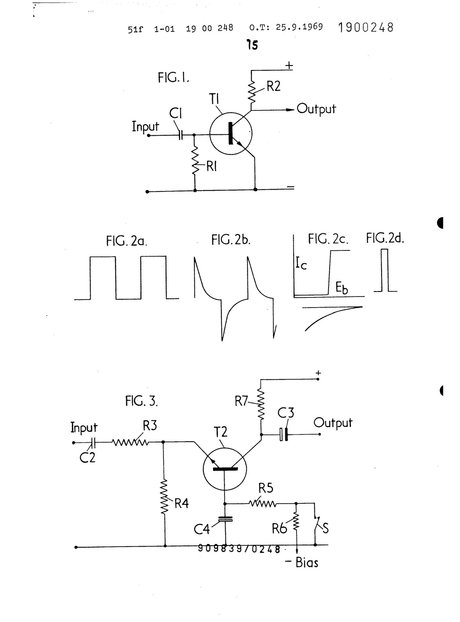 The last page of the German document, illustrating some key points in the circuit and wave form product.

Use the menu at the side of those patent pages to find the document, drawings and so on. Various dates are given - of submission, approval, and so on.

Just to note in passing that in 1972, towards the end of "Vox Sound Limited", horizontal amp logos were sometimes used for Defiant and Super Foundation Bass cabinets. 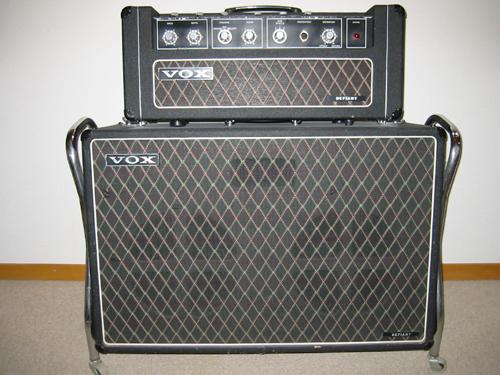 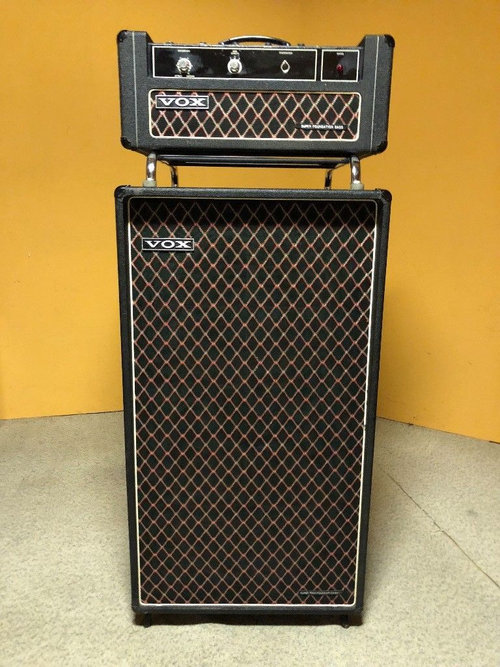 Conquerors and Dynamic Basses had been phased out by the time the amps above were produced. So far as one can tell, however, Supreme speaker cabinets were always given centrally-placed trapezoidal logos - so too Foundation Bass cabs.

Just to note that Defiant no. 2784, late "Vox Sound Limited", is currently on ebay.uk (no affiliation). The mains transformer is noted as being defective. The original green label Goodmans Power Range drivers are still in place in the speaker cabinet.

A nice "Vox Sound Limited" Tonebender from 1971-1972 just sold on ebay. Made for Vox by Sola Sound. The underside notes the Hastings address.

Below an example of the "Hastings Wah" with the same blue and gold logo. The peculiar hole in the foot treadle for the switch was a short-lived experiment by Sola Sound. It's also found on Vox and Sola badged Wow Fuzz pedals. 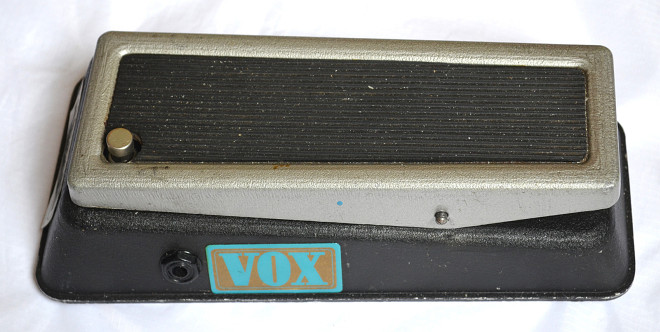 Two things to note: the February 1969 pricelist supported four brochures, not three as stated below (25 November, 2). The fourth illustrated microphones and PA amplifiers.

The Vox "VL" microphones were produced by Reslo - versions of the Reslo UD.1. Vox also sold Reslo ribbon mics (listed as Reslos in its catalogues - see the foot of this page). In early days a small "VOX" logo was added to the throat of the mics. 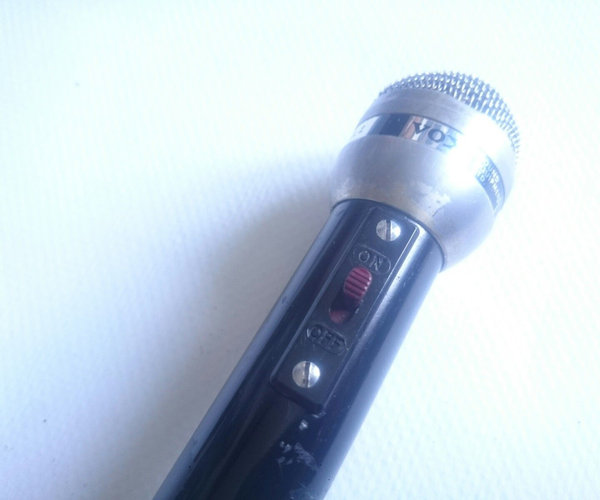 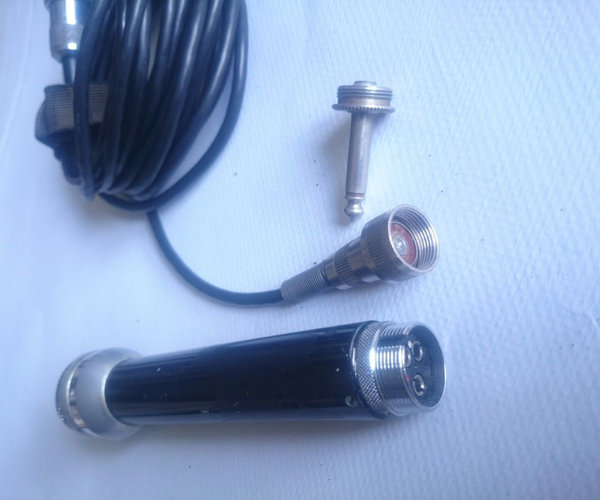 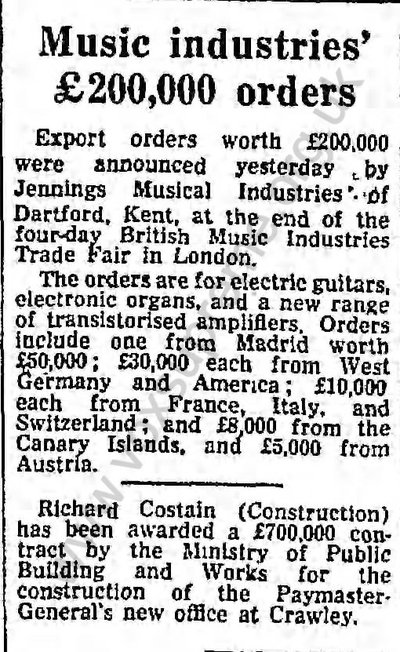 The Guardian, 26th August, 1966, reporting on the British Musical Instrument Industries Trade Fair at the Russell Hotel (21st - 25th August). Interesting to note that sizeable orders were placed for the new range of "transistorised amplifiers". These, however, did not appear on the market until March 1967. 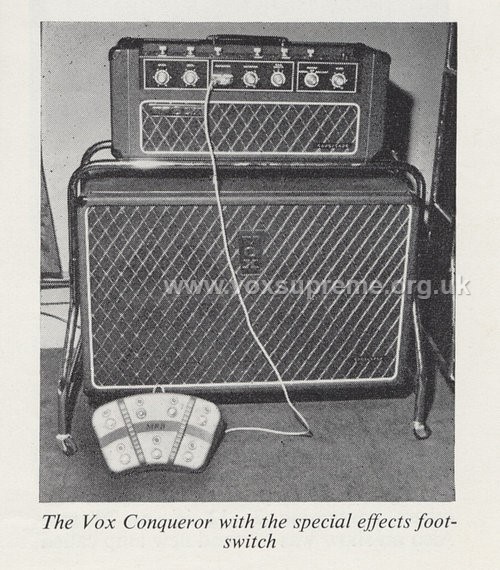 A growing series of pages on Vox showings at Trade Fairs in the mid and later sixties is available on the Vox AC100 website. 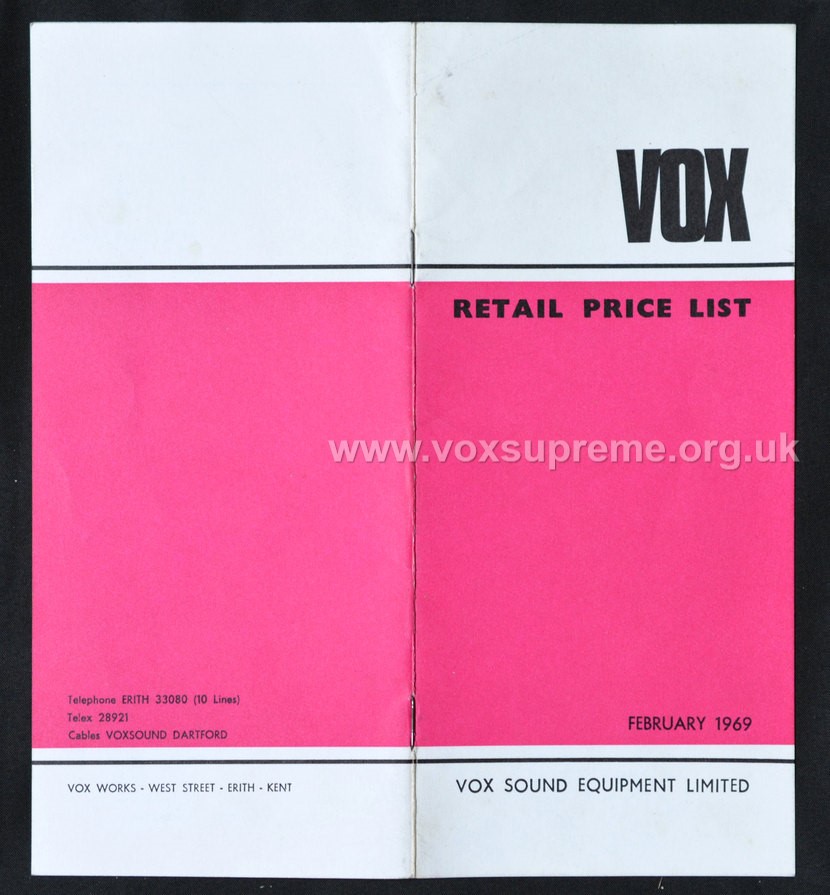 The "Vox Sound Equipment Limited" pricelist of February 1969 was issued in conjunction with three brochures - one each for amps, organs and guitars. The prices of amps in the pricelist were noted on the amp brochure below - probably soon after it had been issued.

The prices cited represent an increase on those quoted in late 1968 - see the note in Beat Instrumental magazine. The market had become extremely tough for Vox in the last years of the sixties. 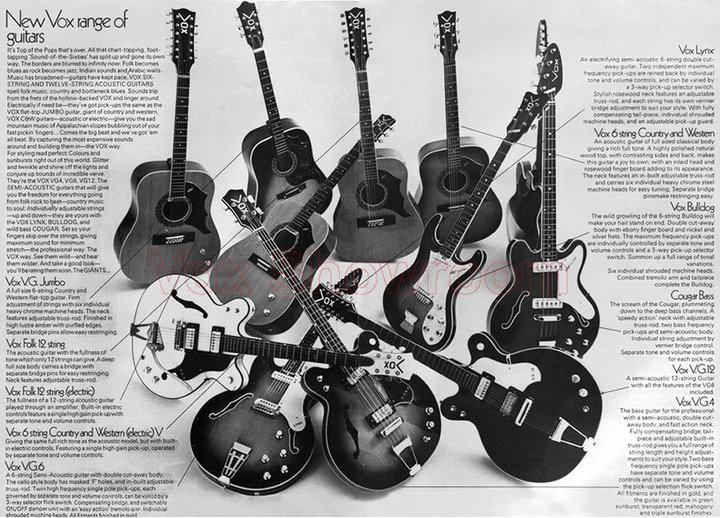 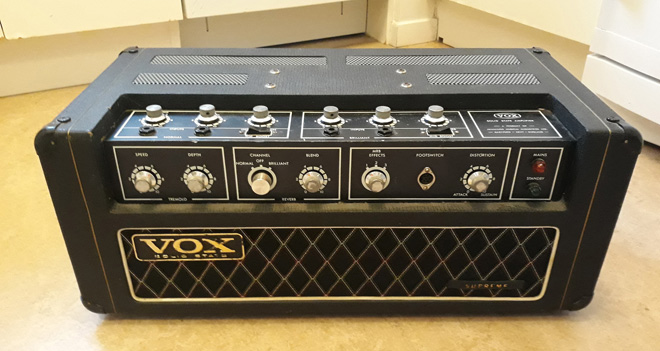 Supreme serial number 1180, the lowest number to date (as Supremes go) with "Solid State" in the logo. Thanks to Kjell for the pictures.

The full text of the 1969 pricelist has now been posted: the first four pages, and the second four. 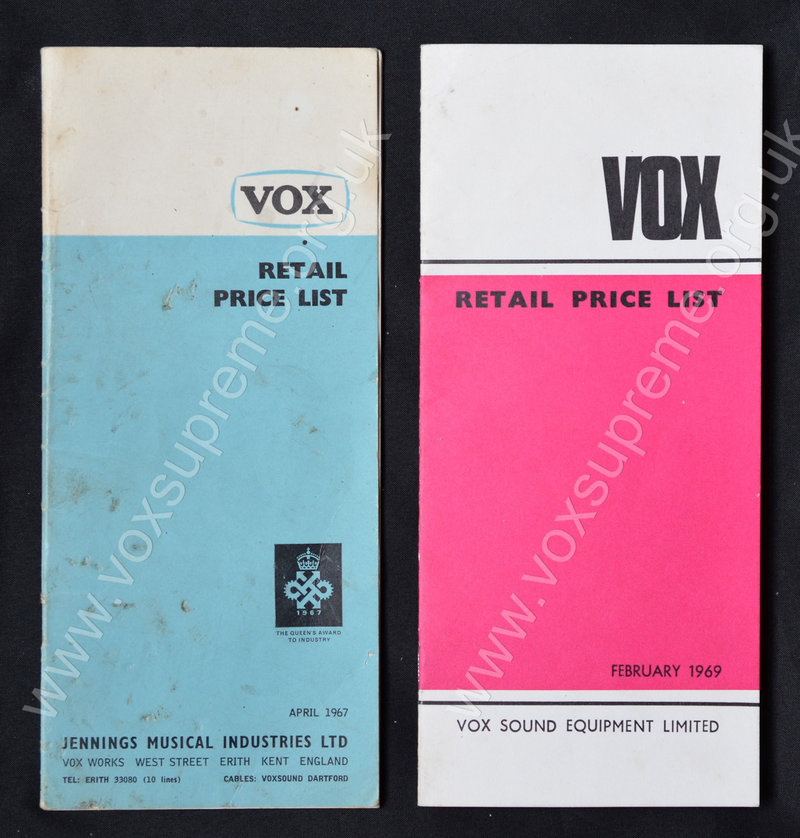 JMI pricelist from April 1967 (the earliest to give prices for the new solid state amps) and Vox Sound Equipment Limited from February 1969. The latter marks a radical contraction of the range, though certain things not in the list were evidently still being sold. The VSEL list is physically a trifle larger than the earlier one.

"Vox Sound Limited" - an advert in "Melody Maker" magazine, 23rd October, 1971, for the showroom at 9 Gees Court. See this page for the various moves of office/showroom and factory in 1971. Unfortunately the mains power consumption of the guitar and bass amps is given rather than the music output - the Defiant and Foundation Bass are 50W amps; 100W (noted on the serial number plate) is what they consume from the mains.

A great new Supreme has just come to light, "Vox Sound Equipment Limited" serial number 2043, complete with covers, tilt-back stand, and footswitch. Thanks to Dario for the pictures.

A nice Conqueror and cab (with fittings) currently on ebay.uk. The latter also has its original Celestion T1088s.

"Midland Beat" newspaper ran from 1964 to 1967, charting the music scene, in the main, at a local level in the midlands of England. From '64-67 there are no Jennings adverts - some pictures of groups with Vox amplifiers - but no great sales push. The Midlands were the preserve of Marshall and Park (some great early ads for those companies, especially Marshall). Then in 1967, with the advent of the solid state line, two huge Jennings ads appear: 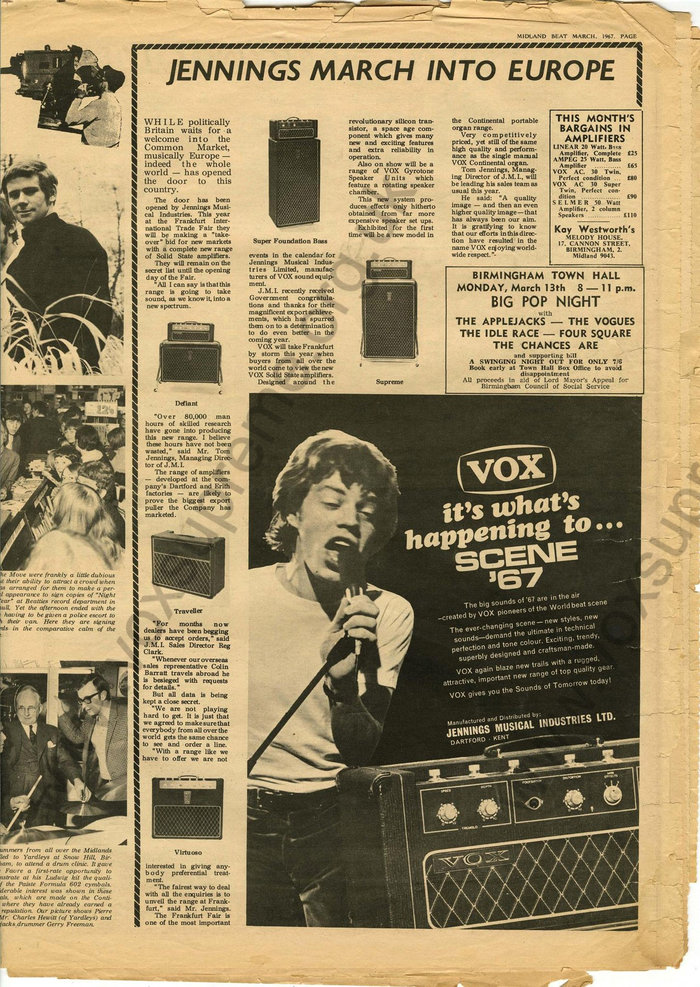 March 1967. The illustrations are of the pre-production amps, the footswitch socket further over to the left and indicator lamps on top of the control panel. Some key comments from Tom Jennings - development of the range took some 80,000 man hours; Colin Barrett, the rep. for JMI, has been besieged with requests for the new range when travelling abroad; the Vox stand at Frankfurt Fair, one of the most important events in the calendar for Jennings, is likely to generate great interest; also on show, the new Gyrotone range.

Detail from above. The Super Foundation Bass cab is in its "production" form. In February 1967 it was illustrated in a form that was considerably wider. 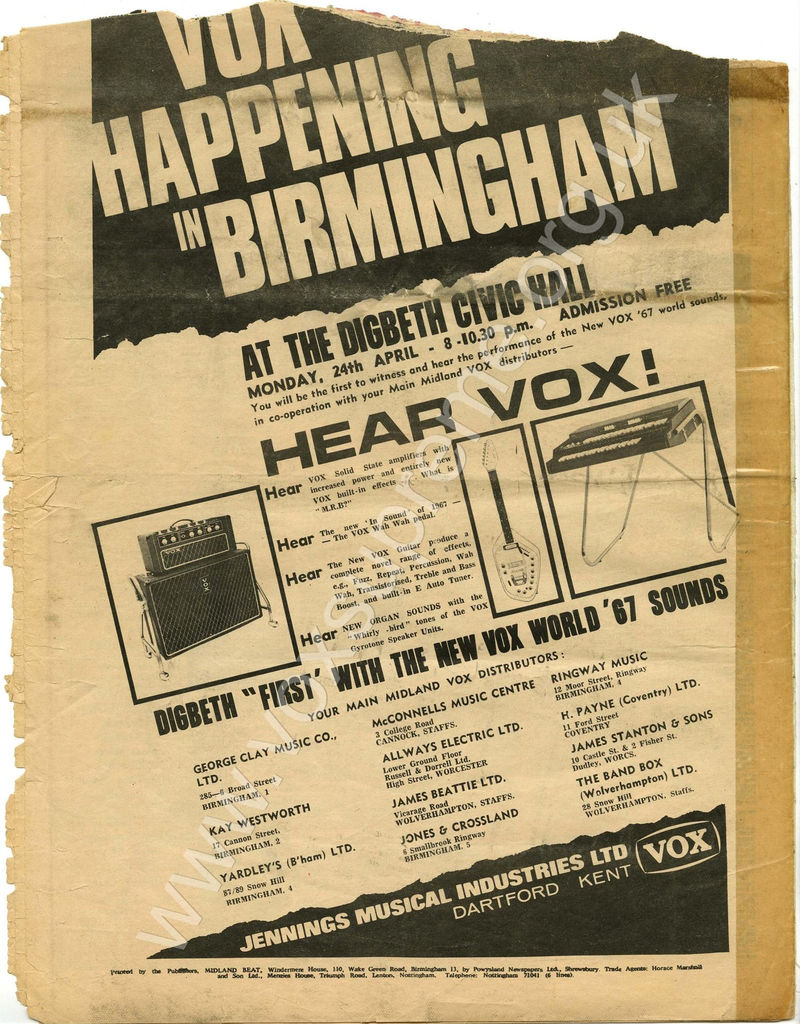 The "Daily Express", 1st February, 1975. The end of Dallas, which had taken on the production of a small selection of Vox items, and another end for Vox.

Rory Gallagher with "Taste", Isle of Wight Festival, 28th August, 1970. Note the Supremes in the background. A larger image shows that there are VSEL labels on the speakers. Photo by Barry Wentzell.

A nice Dynamic bass set - amp, cab and chrome support. Not so many of these around. Thanks to Brad for the picture. The amp is registered on this page.

The page on Vox grey wahs has now been updated to incorporate findings kindly supplied by Stu Castledine, whose knowledge of pedals and effects is unsurpassed. His website is here. 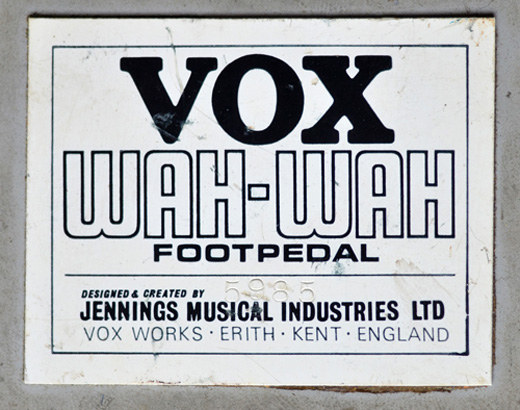 Vox Wah Wah no. 5985. Condition is excellent, electronics untouched. Pictures to be posted soon along with the others signalled below.

A largish batch of updates of amps and cabs will be coming shortly.

Vox Wah Wah no. 6251, complete with original box - a fantastic thing. Further pics will be put up on this page this weekend. Thanks to Raphael. Pics of three other pedals will be added too - 6330, 6988 and 5985, currently en route to the UK.

JMI wahs first came to market in Spring 1967. There is not a shred of evidence at present to show that any were produced in 1966.

"Vox Sound Equipment Limited" Conqueror serial number 2377, distributed in Denmark by "Alfred Christensen". Thanks to Erik for the pictures.

Christensen also distributed two other Conquerors on this page - no. 2271 and one with no number - Defiant no. 2258 on this page - and a Supreme with a number probably in the 2000s..

The main agent in Denmark was "European Musik Import A/S. Kirke Vaerlosevej 261, Lille Vaerlose, a little to the north of Copenhagen. See this page.

The paragraphs below, from this page:

In the mid-1960s, MAX products [amplifiers, speakers, and so on] were distributed to the Danish market by a company in Lille Værløse (suburb of Copenhagen) called European Music Import A / S. Parts of fabrication took place in Lille Værløse, other parts possibly (there are shared opinions on the matter) in England. The proprietor of the company that was to become "SuperSound", the renowned Mr. Larsson, who lived at Lille Værløse at the same time, was the brain behind E.M.I. (not to be confused with the English record label with the same initials).

Larsson, who imported Vox, had found out that he could avoid various taxes and duties on components (pipes, trams, etc.) by importing the loose parts separately and then assembling them here in the country. It gave the idea of ​​a new name in Danish production of amplifiers: MAX.

A Goodmans speaker brochure from the 1970s (to judge by the graphics), probably from a year or two after the end of "Vox Sound Limited" (1973). Note the different varieties of the Audiom 12-P. The particular type was only marked on later Goodmans red labels. 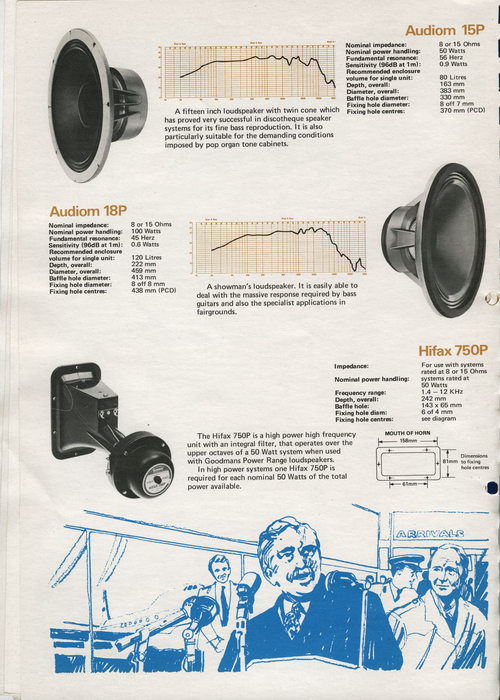 "Melody Maker" magazine, 8th February, 1969. In a section on the Frankfurt Music Fair, a page by "Vox Sound Equipment Limited" on solid state amps. The standby circuit is still in place. Controls, circuit boards, and other elements in the drawings are numbered and described in the accompanying text. Click as ever for larger images. 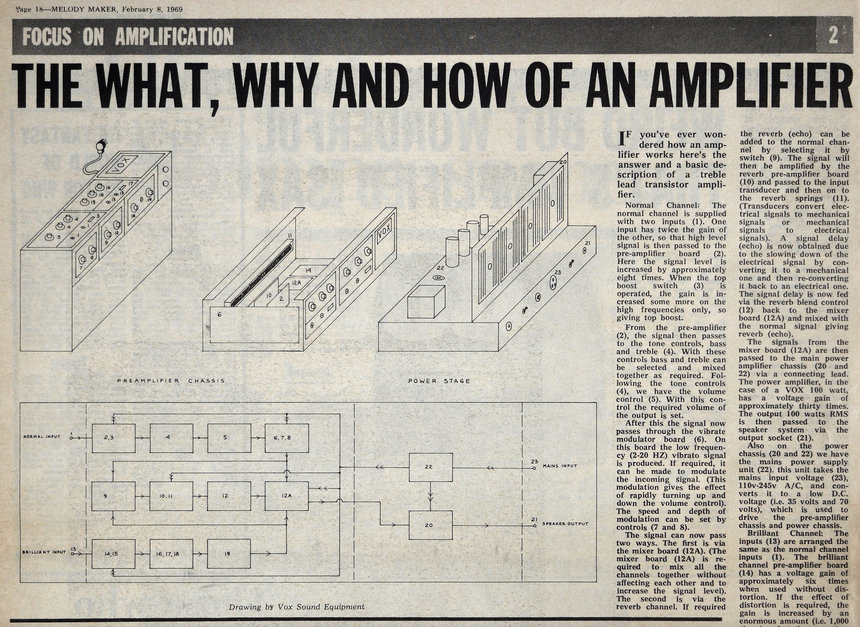 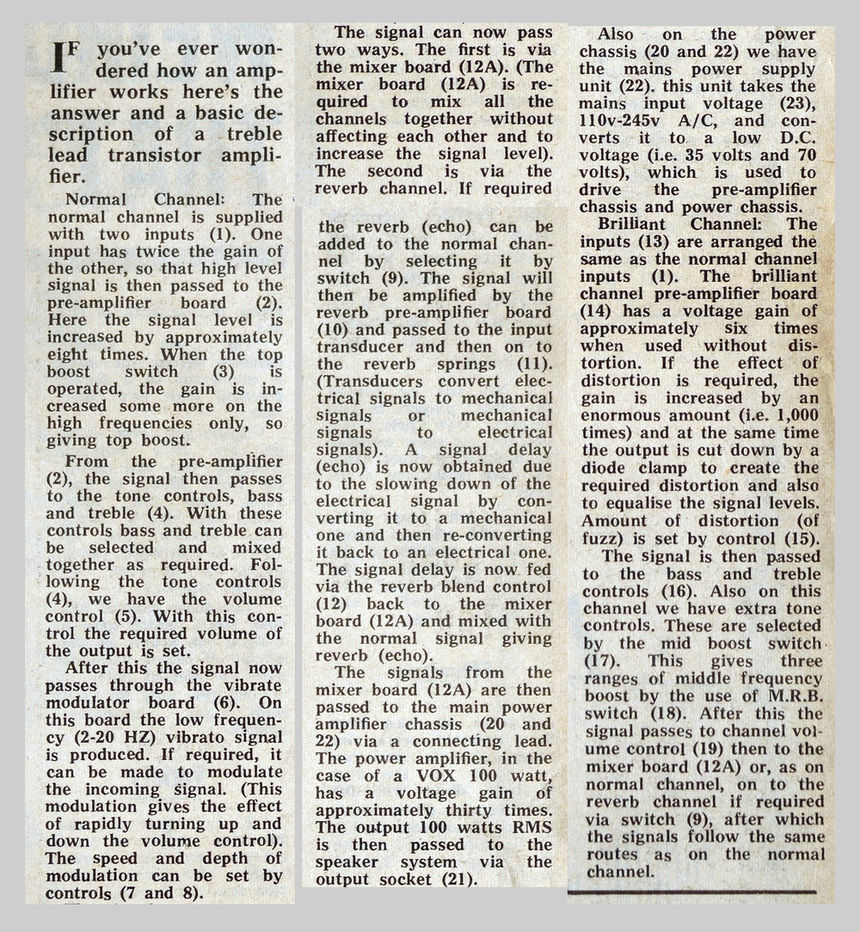 Given that many will only have seen the Vox solid state range in catalogues, shops, and pictures, the piece is likely to have furnished useful info - clearly and concisely.

With its original speaker cabinet.

Serial number plate hand stamped (as is normal at this point in production). For other early VSEL Supremes, see this page. 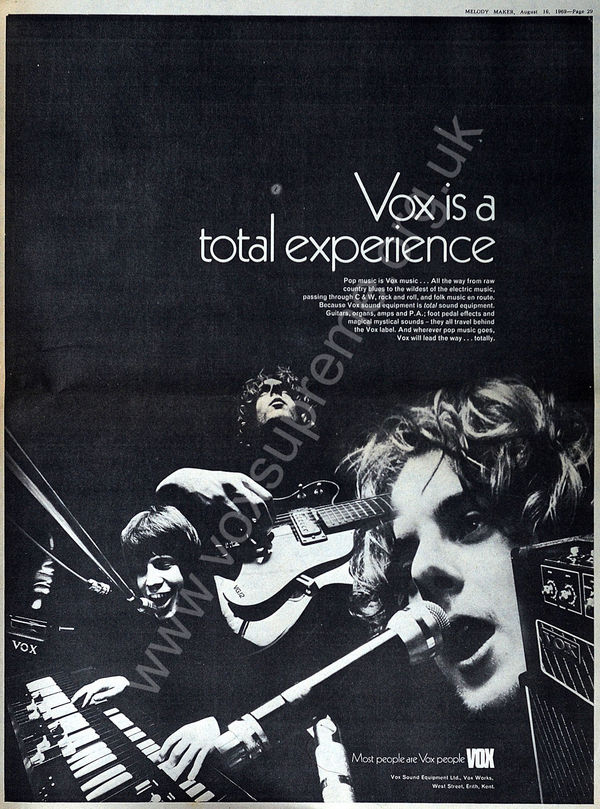 The full page ad in "Melody Maker", 16th Aug., 1969. A version had appeared in "Beat Instrumental" a month earlier - see this page.

"Melody Maker" magazine, 16th August, 1969, review of the "Vox Sound Equipment Limited" stand at the AMII Trade Fair at the Russell Hotel. Note that the PA amps - the SS50PA and SS100PA - are said to be new for 1969, along with the Multi-Link cabinets (4x12" and 2x15" + 2x12"). All had been introduced earlier in the year. The column speakers have been redesigned. The Midas organ amplifier is soon to appear. Links to the various items mentioned can be found on this page.

New pictures of Defiant serial number 1026 and its cab are on three pages: exterior of the amplifier; speaker cabinet; and details of the power section. Thanks to Ed.

Just to register the existence of Supreme no. 1099 (ST.1099) and its cab. Thanks to Alex. Further details may be forthcoming. New pictures of Defiant no. 1026, bought new in Holland (presumably in 1967), and currently in Germany, will be posted soon.

Advert placed by Vox in the same issue. A version of this ad. was also published in "Beat Instrumental" magazine, August 1967 - see this page .

Chuck Berry backed by the Roy Young Band on stage at the Locarno Ballroom, Coventry, 3rd February 1972, with two Supremes. It's not immediately clear which he's plugged into though. The song recorded on the evening is here: 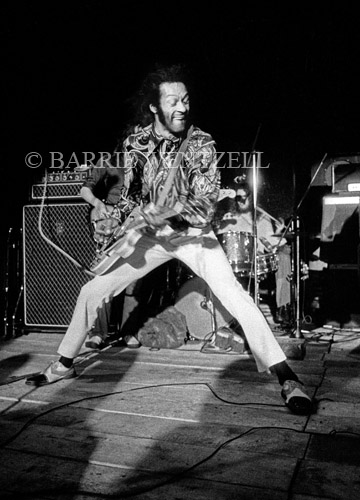 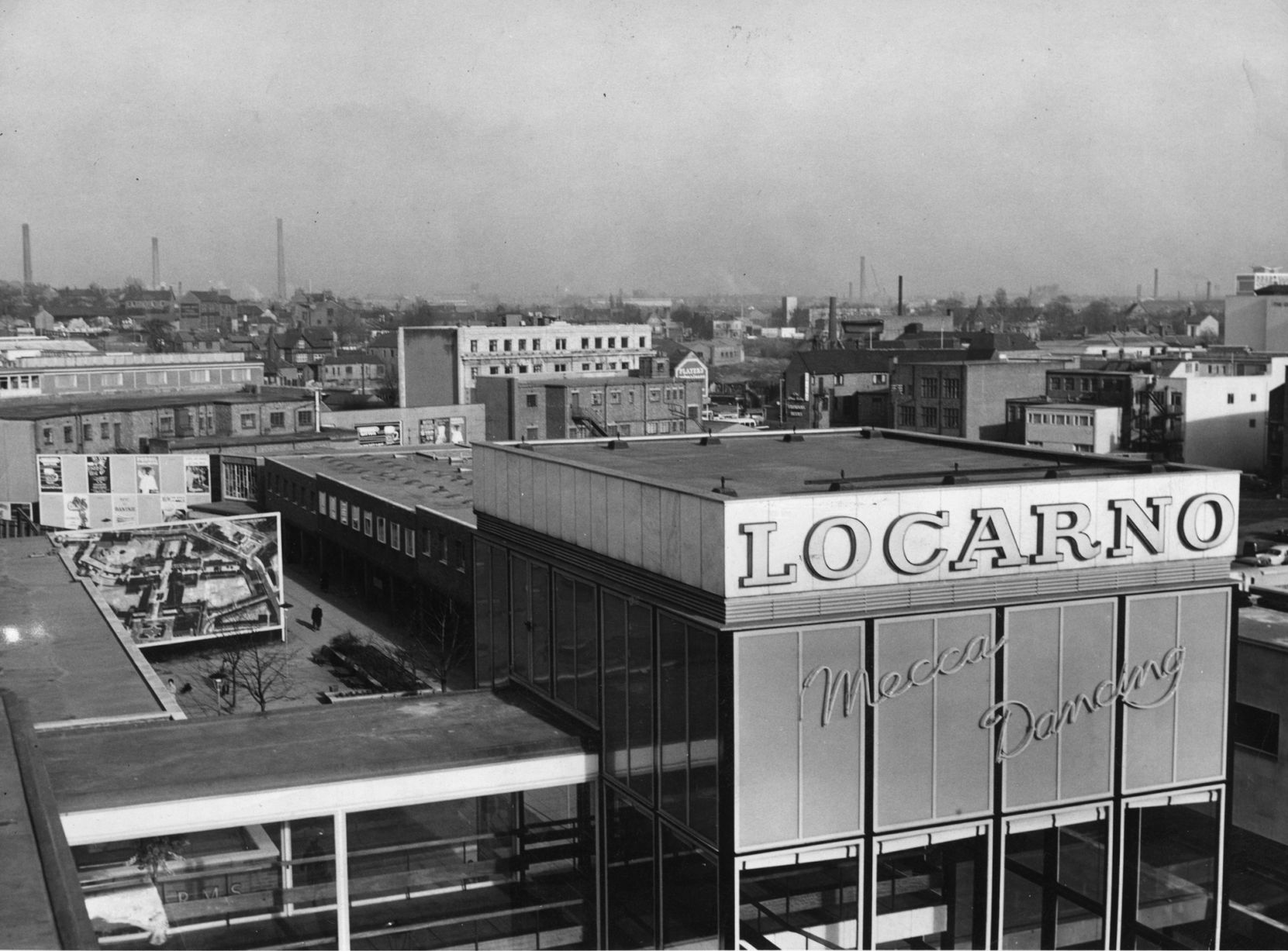 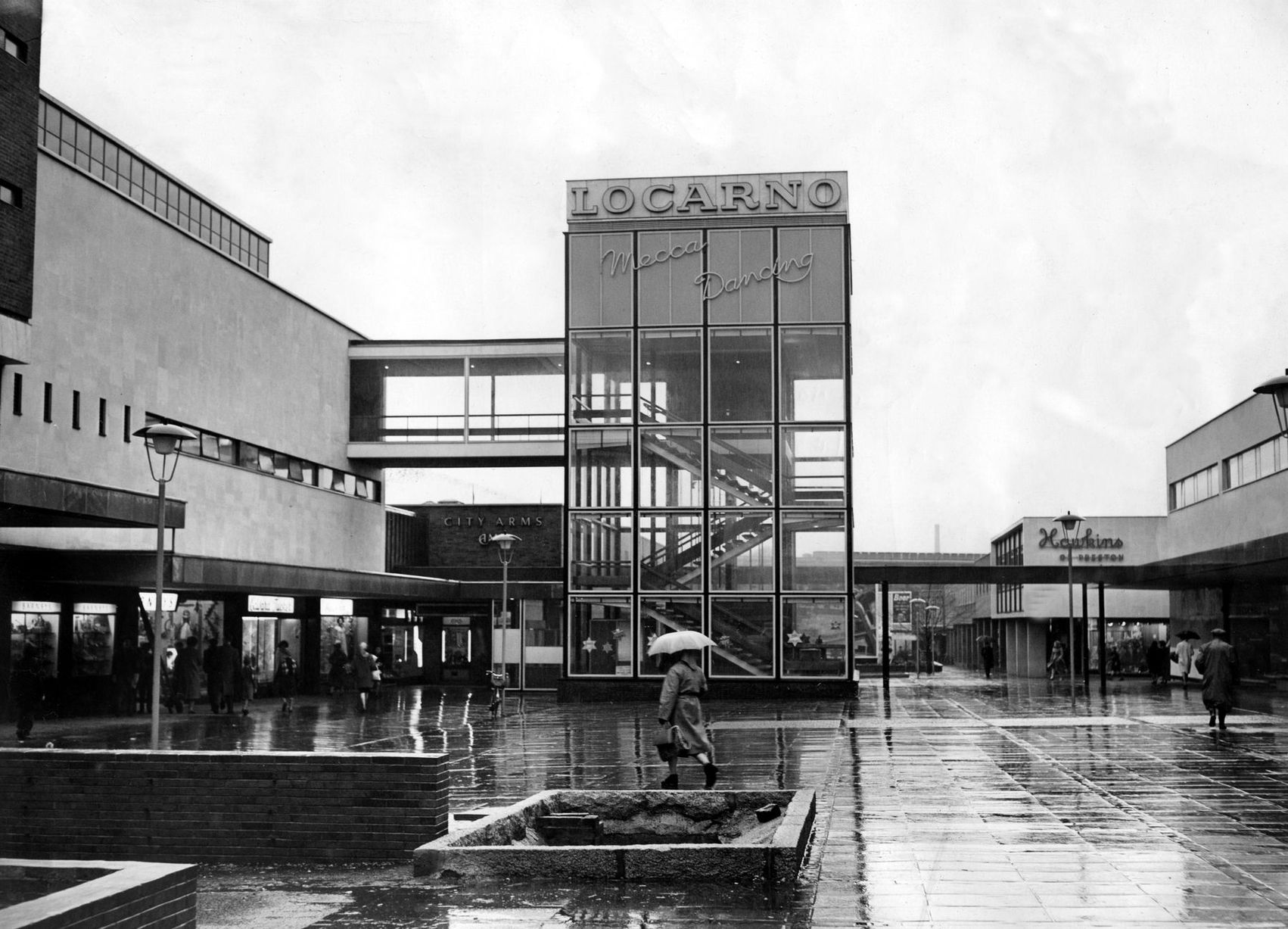 Pictures of the Locarno from here.

A new page on the Vox Discotheque / Discotape has been begun. The Discotheque was protoyped by JMI in 1967 but not put into production until 1971 by "Vox Sound Limited". 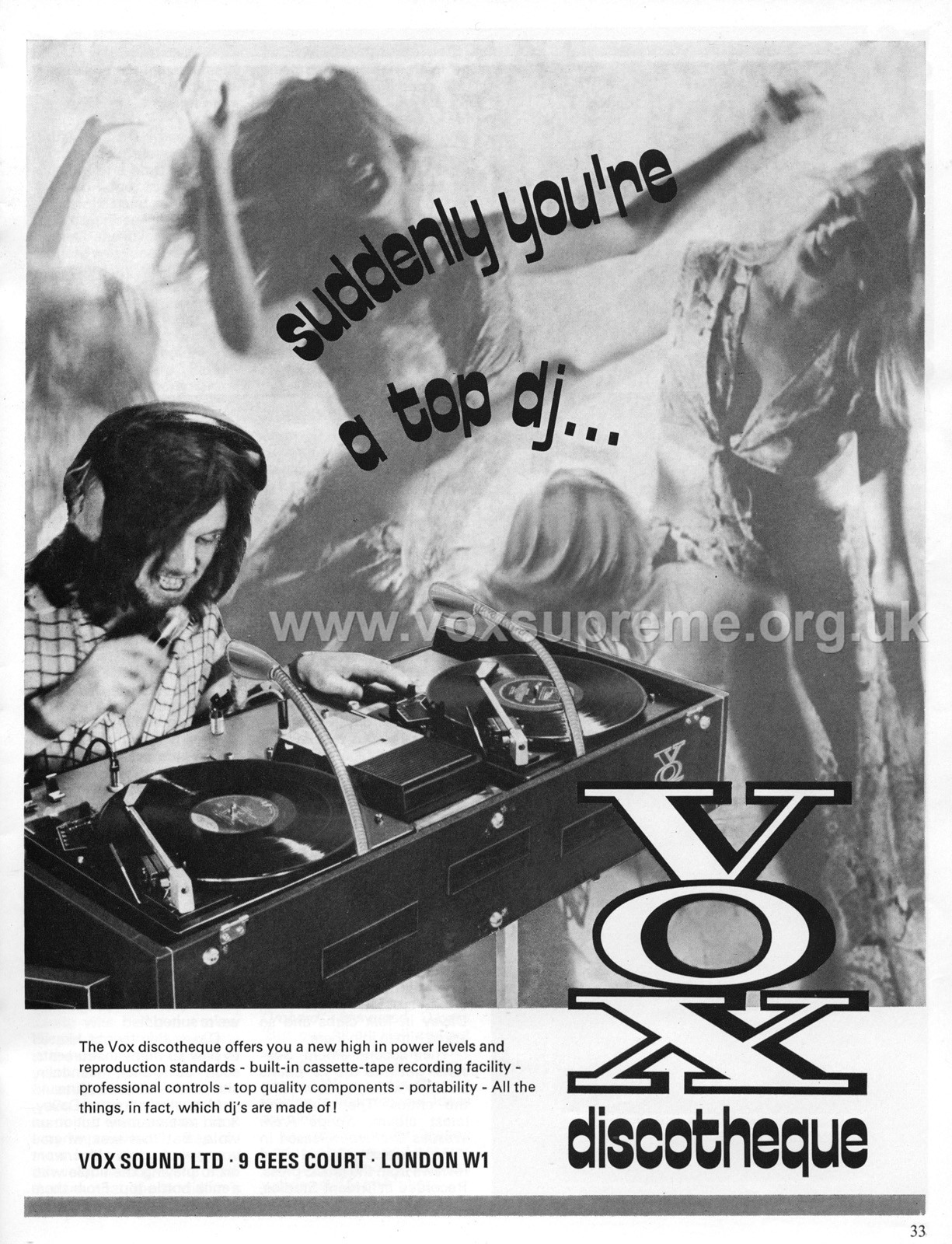 Four more Conquerors registered: 1005, known to be in Colorado, but no pictures at present; 1197; 1422; and a late JMI amp with "Amplifier" rather than "Vox Amplifier" on its serial number plate. 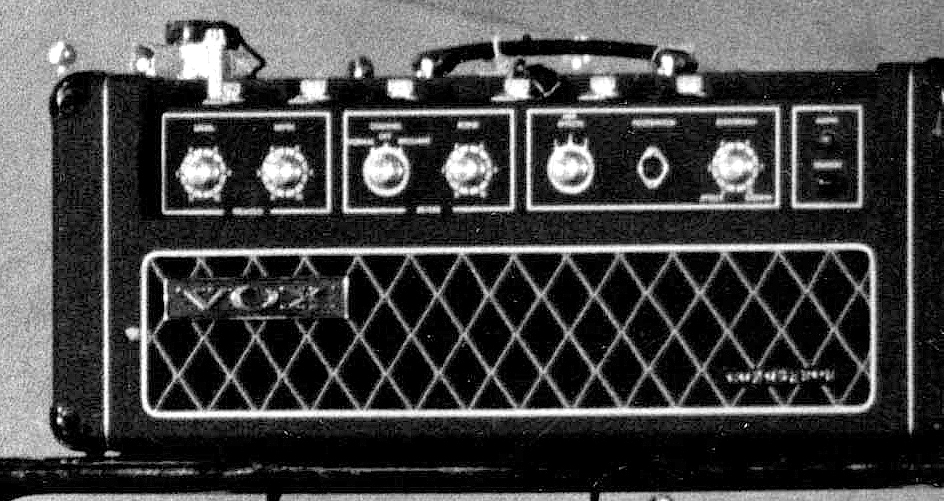 Just for interest, a good-ish large detail of John Lennon's Vox Conqueror on the stage of the Savoy Theatre during the filming of the "Hello Goodbye" video. Slightly indistict though the runner on the front may be, I'll eat my hat if it says "Defiant" rather than "Conqueror".

A detail of the same amp showing its two metal vents. Defiants had four.

Defiant no. 2748, complete with side stands, footswitch, covers, original drivers... - a rare thing. Thanks to Scott for the pictures.

Updates for November and December 2017.

Updates for September and October 2017.

Updates for January and February 2017.

Back to the top