As in previous years, the Trade Fair, one of the most important events in the manufacturers' calendar, took place at the Russell Hotel, Russell Square, London.

A page on the Fair of 1966 (at which JMI first unveiled the new solid state range) can be found here.

The Vox stand at the BMII fair, late August, 1967. Detail from a slightly larger original.

A number of items caught in the photo above were not put into production - see this page. The Fairs served in many respects as a means of gauging interest in new products. The psychedelic lights, which feature in many of the photographs from the Fair of 1967, were ultimately sold off in the summer of 1968 along with the disco console - details on the page linked above in this paragraph. 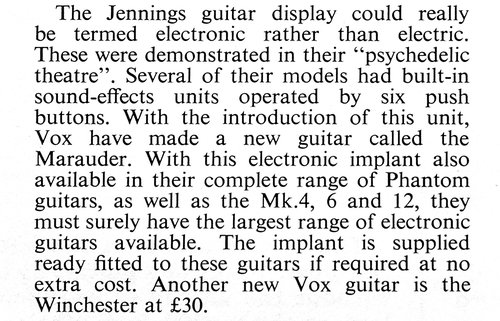 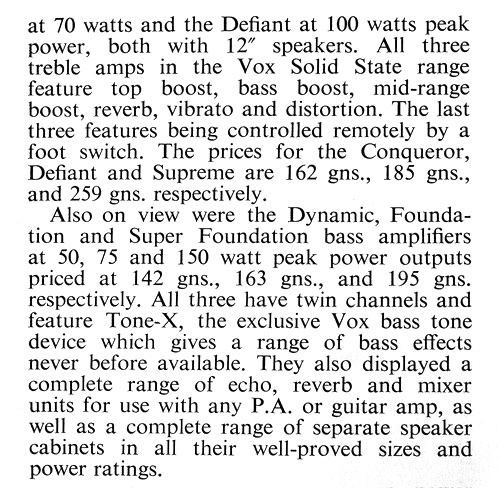 "Beat Instrumental" magazine, October 1967 - from Gary Hurst's report of the show at the Russell Hotel. The amplifier used by Denney and Dave Roberts, JMI's chief demonstrator, is a Defiant. Note that the article gives *peak* power output for the amplifiers.

A further pic of Dick Denney at the BMI Trade Fair, late August 1967, shown with his Vox Escort "Special" - "Special" indicating that the new electronics were built in:

New built-in electronics were the thing - see Gary Hurst's review of the show above. An effects incorporating the electronics that went into the new range of guitars did not make it into production.

On the right, a pre-production effects box. 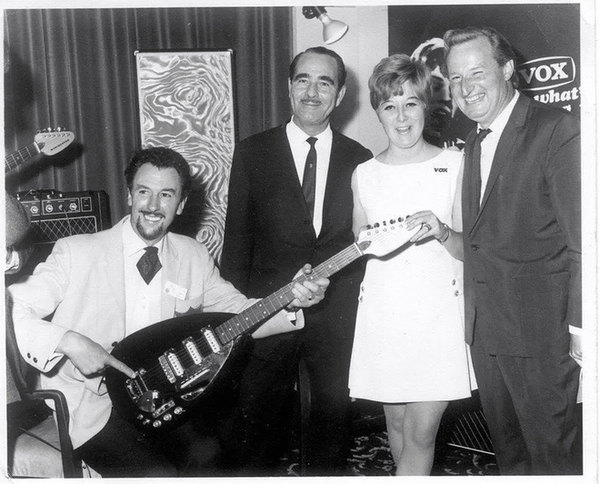 A further shot taken at the British Musical Instrument Trade Fair, 21-24 August 1967, key members of the Vox team lined up. The poster on the right is a large-scale version of an ad placed in "Beat Instrumental" magazine. The guitar is a "Teardrop" Mark VI Special.

Back to the top